A new paper on the Western Marsh Harrier migration out now! 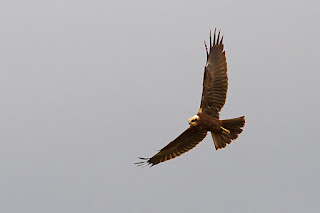 The Western marsh harrier Circus aeruginosus is a partial migrant with populations breeding in eastern and northern Europe migrating south and wintering mostly in sub-Saharan Africa. During autumn migration harriers move on a broad front heading SW and undertaking long sea-crossings en route to their wintering quarters. However, a substantial proportion of birds, mostly juveniles and adult females, migrate only shorter distances wintering in Europe and North Africa. In a 7-year study (2011–2017), between 26 August and 30 September, we compared the ratio and timing of the different sex/age classes of Western marsh harriers (adult male, adult female, juvenile) at two migration bottlenecks: the Strait of Messina (southern Italy) and Batumi (Georgia). At both sites, adult males migrated slightly earlier that adult females and earlier than juveniles. Among adults, males outnumbered females and this difference was more evident along the eastern flyway. At Batumi, a higher proportion of juveniles (first calendar year birds) was reported. The male-biased sex ratio reported at the Strait of Messina is very similar to that reported in broods of Western marsh harriers breeding in The Netherland and Poland. We suggest that the higher proportion of adult males recorded at Batumi could reflect the sex ratio in male-biased populations in western Russia.

Posted by Nicolantonio Agostini at 3:29 PM No comments: