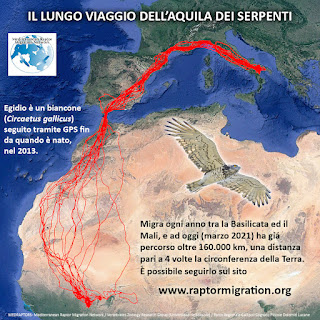 And, finally, the book!

Before passing away almost two years ago, our founder Michele Panuccio began to work on this challenging project, but unfortunately could not complete it. Ugo Mellone and Nicolantonio Agostini did their best to finalize this book, editing the chapters written by some of the major raptor migration experts worldwide. For the first time among WP raptors, and probably for the first time in any bird order, the migratory strategies of each species of a wide geographical area have been summarized according to the most recent findings.
From the foreword, by Richard Porter:
"As I pored over the draft chapters it brought home to me just how dramatically the study of raptor migration has advanced in the last 50 years. Back in the mid-1960s, when I started marvelling at the migration over Turkey’s Bosphorus, raptor watching and counting was a rare event, unheard of in most countries. [...] Now things have moved on apace with advances in identification, aging and sexing, widespread systematic counting at bottleneck sites, radar tracking and, of course, modern technology. Our knowledge would be so much the poorer without the ability to follow the migration and fortunes of these magnificent birds remotely by satellite telemetry. And so I dedicate this Foreword to Michele. What a fitting tribute it is that his colleagues have honoured him by completing the work he started. True friendship and a lasting legacy." 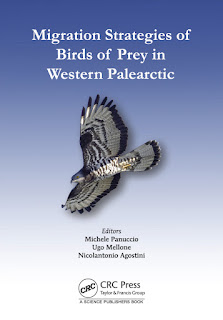 The book is in press and already available for order here or through NHBS and Amazon.
In the above mentioned website you can also find the full list of chapters with the respective authors. Each chapter includes at least a map and the color plates include spectacular photos of raptors during active migration, taken by several photographers.
Posted by Unknown at 7:16 PM No comments:

This study investigated the influence of wind conditions on the migration patterns of European honey-buzzards across the Strait of Messina. Simultaneous observations occurred at four watchpoints, three on the Sicilian side and one on the continental boundary (Calabrian side). The magnitude of honey buzzards spring migration at the Strait is strongly affected by wind patterns in the Sicilian Channel the previous day. By interpreting migratory behaviour both at local and regional scales, this work can help to plan more efficient monitoring of honey buzzard and improving the efficiency of anti-poaching efforts. 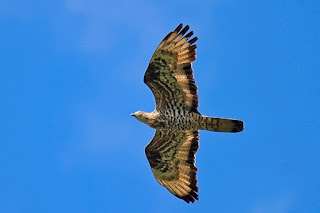 Previous studies concerning timing of autumn migration in relation to sex groups in adult European honey buzzards provided contrasting results. In particular, a field survey made in southern Sweden did not report differences in timing, while a satellite study via GPS tracking on six adults, three males, and three females, revealed that the latter departed earlier. The aim of this 4-year study (2016-2019) is to further investigate the timing of autumn migration in this species carrying out observations at the Strait of Messina. Adult European honey buzzards concentrated the passage between late August early September, with females passing on average 5 days earlier than males. It is suggested that a different role of sexes concerning exhibition of territorial displays during the late breeding season, would explain differences between sex groups in timing of both moult and autumn migration.

Posted by Nicolantonio Agostini at 9:40 AM No comments: