A southern Indian temple at Thirukalukundram near Chengalpattu is famed for a pair of Egyptian Vultures that have reputedly visited the site for "centuries". These birds are traditionally fed by the temple priests and arrive before noon to feed on offerings made from rice, wheat, ghee and sugar. Although punctual, the failure of the birds to turn up was attributed to the presence of "sinners" among the onlookers. Legend has it the vultures represent eight sages who were punished by Shiva with two of them leaving in each of a series of epochs. 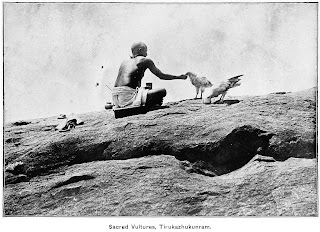