In these days many thousands of different species of raptors have been observed at Batumi (Georgia). Among others, Honey Buzzards, Black kites, Levant Sparrowhawks, Steppe Buzzards., Montagu's Harriers, Pallid Harriers, Egyptian Vultures. The Camp is led by Batumi Raptor Count who invited members of MEDRAPTORS. There are about 20 volunteers making observations from Holland, Belgium, Georgia, France, United States, Germany, Armenia and Italy of course.
Here below a picture made yesterday in Batumi to Crested Honey Buzzard that is really a rare sight in the Western Paleartic area. 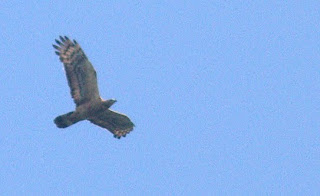 Posted by medraptors at 7:49 PM