Conservation of birds of prey in Sicily

Medraptors would like to support an important project for the protection of two rare species of Mediterranean raptors. The project is promoted by several NGO and Foundations active in southern Italy (CABS, EBN Italy, FIR, LIPU, MAN, WWF). In particular the two endangered species are: the Bonelli's Eagle and the Lanner Falcon. The main threats for these raptors in Sicily are linked to the illegal trafficking of eggs and chicks from nest. The project is developped to prevent this detrimental activity. In 2012, 75 volunteers have assisted to the fledging of 32 young eagles!
To improve the project is requested the help of everybody. If you want to partecipate or to support the conservation programme you can write us or to the coordinator of the project Giovanni La Grua (lagruagio[at]alice.it). To read more about it, click on the link below:
Raptor conservation in Sicily 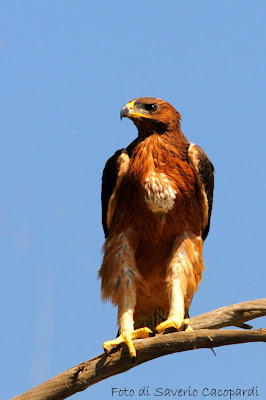 On the picture a beautiful young Bonelli's Eagle born in a monitored nest in 2012.
Posted by medraptors at 6:20 PM